This page is for healthcare professionals and those involved in the planning associated with the costs of Pharmaceuticals to the NHS in the UK.

If you require information on drugs and are not a healthcare professional please ask your pharmacist or doctor.

The information on this page is intended for use by healthcare professionals only. 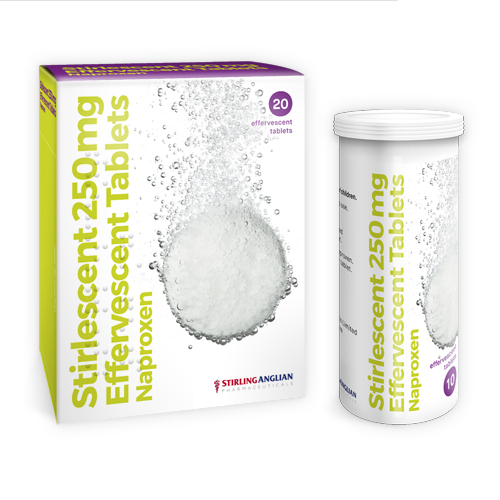 This information provides a brief summary about Stirlescent® 250mg effervescent tablets. Each tablet contains 250mg of naproxen sodium. Naproxen is a non-steroidal anti-inflammatory drug (NSAID) and Stirlescent® is licensed for the treatment of rheumatoid arthritis, osteoarthritis, ankylosing spondylitis, gout, dysmenorrhoea and acute musculoskeletal conditions in adults.

Stirlescent® 250mg effervescent tablets (blackcurrant flavour) offer a lower cost option for treatment with naproxen in patients who may experience swallowing difficulties and who require a liquid form of NSAID. The product is the only licensed effervescent tablet formulation that is currently available. The only other option that exists is liquid ‘specials’ formulations that are not licensed and are costly due to the requirement for limited batch production. More recently a licensed liquid formulation of naproxen 125mg/5ml has been marketed. The cost of this product is in line with that of the ‘specials’ formulations.